Signed into law in 1993 by President Bill Clinton, the Family and Medical Leave Act (FMLA) provides eligible employees up to 12 workweeks of unpaid leave a year, and requires group health benefits to be maintained during the leave as if employees continued to work instead of taking leave. Employees are also entitled to return to their same or an equivalent job at the end of their FMLA leave. The FMLA also provides certain military family leave entitlements. Eligible employees may take FMLA leave for specified reasons related to certain military deployments of their family members. Additionally, they may take up to 26 weeks of FMLA leave in a single 12-month period to care for a covered service member with [...]

Read More
Comments Off on Frequently asked questions about FMLA 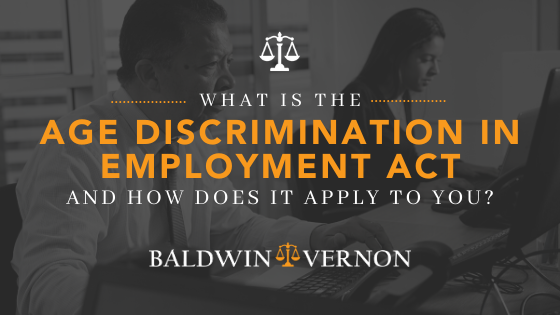 What is the Age Discrimination in Employment Act and how does it apply to you? Gallery

What is the Age Discrimination in Employment Act and how does it apply to you?

What is the Age Discrimination in Employment Act and how does it apply to you?

In 1967, three years after Congress put in place the Civil Rights Act which prevented workplace discrimination based on race, color, national origin, religion, or sex, Congress passed the Age Discrimination in Employment Act (ADEA). The ADEA of 1967 protected individuals over the age of 40, and put them on an even playing field when it comes to being hired, getting fired, and being subject to promotions, benefits, layoffs and trainings. In addition to the ADEA, most states have now passed laws making age discrimination in employment illegal. However, under the Missouri Human Rights Act, the state law only protects those between the ages of 40 and 70 -- allowing for employers to discriminate against employees over the age of [...]

Read More
Comments Off on What is the Age Discrimination in Employment Act and how does it apply to you? Recent changes in Missouri employment laws now make it harder to go after an employer, and it makes it easier for employers hide their past wrongdoings.

Read More
Comments Off on Changes In Missouri Employment Laws Have workplace laws changed because of the pandemic? Gallery

Have workplace laws changed because of the pandemic?

Have workplace laws changed because of the pandemic?

The pandemic has brought about many shifts in our daily lives and it has affected people in different ways. While there is no doubt that Covid-19 has made a huge impact on the world, it has not changed the laws in place to protect workers at their jobs. Here are just some examples of how the law remains firm. Discrimination can be virtual While much of the workforce shifted their office to their homes at the beginning of the pandemic, many still remain working remotely. For those that are working out of the office, you are still protected from harassment or discrimination that takes place virtually. Inappropriate email chains, text messages, online chats, video calls, and phone calls can all [...]

Read More
Comments Off on Have workplace laws changed because of the pandemic? The U.S. Equal Employment Opportunity Commission (EEOC) has made it clear that discrimination and harassment remain unlawful and the agency has worked to guide companies and workers to navigate their rights during the pandemic. While the Centers for Disease Control (CDC), among other health organizations, has stated that individuals over the age of 65 are at a higher risk of complications resulting from a Covid-19 infection, this does not cancel out any rights that older workers have at the workplace. Here are 4 rights that older employees should know about as they work through this international health crisis. You have the right to go to work You cannot be banned from the workplace due to your age or excluded from [...] Can your employer make you wear a mask at work? Gallery

Can your employer make you wear a mask at work?

Can your employer make you wear a mask at work?

While some workplaces have continued to do their essential business, others have remained completely closed, and some continue to work on a fully remote basis. With stay-at-home orders being lifted, many organizations are beginning to open their doors to the public for the first time, so what does that mean for business and how does that affect employees? Here are some things you should know about your rights at the workplace, while we continue to fight the Covid-19 pandemic together. Employers can require employees to wear PPE During a pandemic, employees can be required to wear PPE at work such as masks, gowns, or gloves that are designed to protect employees from a Covid-19 infection. In addition, an employee with [...]

Read More
Comments Off on Can your employer make you wear a mask at work? In this episode, Kevin Baldwin and Sylvia Hernandez talk about pregnancy discrimination in the workplace and how various laws including FMLA protects both women and men against discrimination by their employers. What you should know about workplace retaliation Gallery

What you should know about workplace retaliation

What you should know about workplace retaliation

The spotlight is often on discriminatory actions or harassment claims, but what about the unlawful repercussions of speaking up? It is against the law for an employer to retaliate against, or punish, an employee for making a discrimination or harassment claim, or for participating in an investigation at their place of work. According to the U.S. Equal Employment Opportunity Commission (EEOC), “it is unlawful to retaliate against applicants or employees for: filing or being a witness in an EEO charge, complaint, investigation, or lawsuit communicating with a supervisor or manager about employment discrimination, including harassment answering questions during an employer investigation of alleged harassment refusing to follow orders that would result in discrimination resisting sexual advances, or intervening to protect [...] 7 examples of sex discrimination at work

7 examples of sex discrimination at work

The Civil Rights Act of 1964 is a landmark U.S. law that prohibits discrimination based on race, color, religion, national origin, or sex. Sex discrimination is still present in today’s workforce and 42% of women in the U.S. have reported gender discrimination on the job. As it’s Women’s History Month, here are 7 examples of sex discrimination at work toward women. What is sex discrimination? The U.S. Equal Employment Opportunity Commission states that “sex discrimination involves treating someone (an applicant or employee) unfavorably because of that person's sex. The law forbids discrimination when it comes to any aspect of employment, including hiring, firing, pay, job assignments, promotions, layoff, training, fringe benefits, and any other term or condition of employment.” The [...]